Did the Witnesses See Transmitted Images of Jesus? 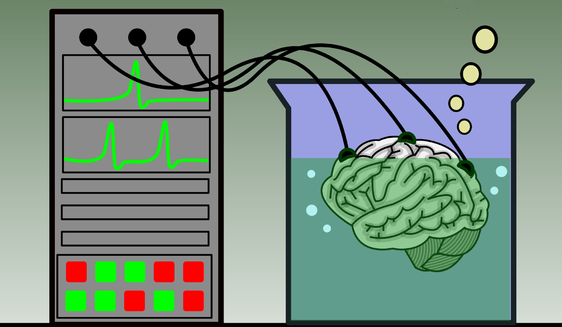 Christian apologists confidently maintain belief in Jesus’ supernatural resurrection is a rational belief (more>>). In support of that proposition, one of the lines of evidence Christian apologists point to is the historically documentation evidence that after Jesus died on the cross and was buried, he was seen alive by multiple witnesses in a physically resurrected body.

According to the historical record, after Jesus’ death and burial, he appeared alive on twelve (12) separate occasions to more than 500 people, including at least two skeptics (James the Just and Paul fka Saul). On all twelve occasions Jesus was seen and probably heard. Jesus offered himself to be touched on at least three occasions and he was definitely touched twice. Jesus showed the scars from his crucifixion on two occasions and ate food with the disciples on 3 – 4 occasions. On four occasions the witnesses responded to their encounter with the risen Jesus by worshiping him. (Go to index of eyewitness accounts) [See, Norman Geisler, The Battle for the Resurrection, pg. 141 (1984); Norman Giesler, Baker Encyclopedia of Christian Apologetics, pg. 655 (1999); John Ankerberg & John Weldon, Ready with an Answer, pg. 81 (1997); Kenneth Boa & Robert Bowman, 20 Compelling Evidences that God Exists, pg. 253 (2002); Lee Strobel, The Case For Easter, “Interview with Gary Habermas, Ph.D., D.D.”, pg. 72 (1998)]

Reasons Christian Apologists Maintain the Theory that the Witnesses Saw Transmitted Images of Jesus, Instead of Jesus in a Resurrected Body, is Inadequate

Christian apologists respond to the proposition that the witnesses may have only seen transmitted images or telegraphed images of Jesus by raising the following rebuttal points:

Rebuttal Point No. 1: The Theory that Jesus Appeared as a Transmitted Image Merely Substitutes One Supernatural Phenomenon for Another

Rebuttal Point No. 2: The Theory that Jesus Appeared as a Transmitted Image Does Not Explain the Empty Tomb

If the witnesses only saw transmitted images of Jesus, his dead physical body would have still been in the tomb and could have easily been produced by the Romans or Jewish leaders to squelch the rise of Christianity, which they viewed as a tremendous threat to their authority. [See, John Ankerberg & John Weldon, Ready with an Answer, pg. 113 (1997)] However, the tomb Jesus was buried in was found empty and those who propose Jesus only appeared as a transmitted image must offer a reasonable explanation for the empty tomb which has not been done. [Go here to examine the problems skeptics face in attempting to explain away the empty tomb.]

Rebuttal Point No. 3: The Greek Words Used to Describe Jesus’ Resurrection Appearances Denote a Physical Resurrection, Not a Transmitted Image

The Greek words used in the original text of the earliest church creeds to describe Jesus’ resurrection as well as the future resurrection of his followers, are “anastasis sarkos and anastasis nekron, which mean “the standing up [or getting up] of the flesh” and “the standing up of the corpses.” Both expressions clearly refer to a physical body rather than an image. Anastasis is a word for bodily posture. Sarkos and nekron refer to real physical bodies. [See, Peter Kreeft & Ronald Tacelli, Handbook of Christian Apologetics, pg. 178 (1994)] Therefore, it seems clear the authors intended to say Jesus’ resurrection was a physical resurrection.

Rebuttal Point No. 4: Transmitted Images Cannot Be Touched, Yet, the Historical Record Documents the Resurrected Jesus was Touched Several Times

Any transmitted image would be immaterial and, therefore, could not be touched. Yet, the historical record documents multiple occasions when the resurrected Jesus was physically touched:

Rebuttal Point No. 5: Transmitted Images Wouldn’t be Heard by Multiple People at the Same Time

Skeptics provide no explanation as to how a transmitted image could have been heard. However, in the case of the resurrected Jesus, not only was Jesus heard by multiple people on ten separate occasions, he held extended conversations with many of the witnesses who were often in groups when Jesus appeared to them:

In the case of Jesus’ resurrection, the rebuttal points set forth above weigh decidedly against the explanation that the witnesses only saw transmitted images of Jesus. The other alternative explanations skeptics have offered to explain the eyewitness reports that Jesus was seen alive after his death on the cross are similarly inadequate (more>>). Consequently, Christian apologists maintain it is reasonable to look beyond such explanations for an explanation that adequately explains all of the historical evidence, including the explanation that God supernaturally raised Jesus from the dead.

Following a two day debate over the evidence of the resurrection between Dr. Gary Habermas and well-known skeptic, Dr. Anthony Flew, a panel of five philosophers from American universities (including the University of Virginia, James Madison University and the University of Pittsburgh) voted 4 to 1 in favor of the case for the resurrection, with 1 judge voting the debate was a draw. After listening to both sides of the debate, one of the judges concluded the historical evidence of Jesus’ resurrection was “strong enough to lead reasonable minds to conclude that Christ did indeed rise from the dead.” [Ankerberg & Weldon, Ready With an Answer, pgs. 132-133 (1997) citing to Terry L. Miethe (ed.), Did Jesus Rise from the Dead? The Resurrection Debate, pg. xiv (New York Harper & Row, 1987)]. Another of the judges stated:

[Ankerberg & Weldon, Ready With an Answer, pgs. 132-133 (1997) citing to Terry L. Miethe (ed.), Did Jesus Rise from the Dead? The Resurrection Debate, pg. xiv (New York Harper & Row, 1987)] Because there are good reasons to believe God exists and that he supernaturally raised Jesus from the dead, Christian apologists insist it is not only unfair for skeptics to claim Christians are intellectual simpletons for believing in Jesus’ resurrection but it is intellectually dishonest to write off the resurrection as mere foolishness.

For information on how to know God personally, go here.

William Lane Craig, Knowing the Truth About the Resurrection: Our Response to the Empty Tomb(Servant, 1988)

Frank Morison, Who Moved the Stone?(Zondervan,1958)

Lee Strobel, The Case for Easter: Journalist Investigates the Evidence for the Resurrection (Zondervan, 2004) (HS/C)

Slideshow Photo: English version of en:Brain in a vat by “was a bee” downloaded from www.wikimedia.org which states the illustration was released into the public domain by its author.