Does the Big Bang Eliminate the Need of a Creator or Is it Evidence of a Transcendent Creator? 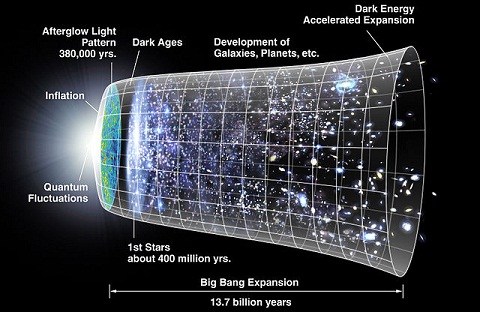 Illustration of the Big Bang

Although many Christians have traditionally rejected Big Bang cosmology, today many Christian theologians and apologists maintain that when properly understood, the Big Bang actually points to the existence of a transcendent Creator, like the God described in the Bible.

This article explores three questions:  1) Why have so many Christians have traditionally rejected Big Bang cosmology? (skip to>>); 2) What is the Big Bang — a chaotic explosion out of nothing or evidence of transcendent design? (skip to>>) and 3) Why did the Big Bang theory lead many secular scientists to conclude it provided a rational basis for believing in a transcendent cause of the universe, like the transcendent Creator described in the Bible? (skip to>>)

Why Have So Many Christians Traditionally Rejected Big Bang Cosmology?

There is no question that vigorous debate exists among Christians over how the creation account in Genesis 1 & 2 is to be interpreted. Although there are several competing views, the proponents of the differing biblical creation views basically fall into one of two major camps: Young Earth Creationists (YECs) or Old Earth Creationists (OECs). Generally, YECs believe a correct interpretation of Genesis requires the view that God created the world in six consecutive 24 hour days about 6,000 – 10,000 years ago. OECs generally believe the biblical creation account permits a creation date that is consistent with the universe coming into existence about 13-14 billion years ago and the Earth forming about 4-5 billion years ago, as proposed by secular scientists.

[Summaries of some of the differing biblical creation views are available here.]

[I]nstead of disproving that God created the world, the big bang theory actually gives scientific evidence for an ultimate beginning to the universe and points toward a transcendent source.  — Charles Colson and Nancy Pearcey [How Now Shall We Live, pg. 81 (1999)]

Many OECs also point out that Big Bang cosmology presents significant challenges to the validity of any religion that claims God and the universe are one (i.e., religions with pantheistic elements) or which describe God as being confined to the universe, creating from within the universe or creating within time.

Regardless of a Christian’s particular view of the correct interpretation of Genesis 1 and the age of the Earth, because Big Bang cosmology is taught in every secular High School and College, all Christians should at least have a general understanding of what the theory says/doesn’t say and why at least some Christian apologists maintain Big Bang cosmology actually supports a biblical worldview.

What is the Big Bang — A Chaotic Explosion Out of Nothing or Evidence of Transcendent Design?

As explained by Christian astronomer and astrophysicist Hugh Ross, even secular scientists do not propose the Big Bang was a disordered or chaotic “bang”, as its name may imply. In fact, Ross contends that nothing is further from the truth. Rather, as explained by Ross, the Big Bang was “an immensely powerful yet carefully planned and controlled burst of creation – a sudden release of power from which the universe unfurled in an exquisitely controlled expansion. In an instant, time, space, matter and energy, along with the physical laws governing them all, came into existence from a source beyond the cosmos.” Even the popular atheist, Richard Dawkins, admits he is intrigued as to how the universe came into existence with the laws of nature already written into it. [See, Alister McGrath, Ravi Zacharias International Ministries, Foundations of Apologetics, “The Existence of God” (2007), aired on NRB, 2/24/10]  There is no dispute among scientists that the Big Bang was not a chaotic explosion.  Rather, as explained by Hugh Ross, the expansion of the universe demonstrated exquisite balance, extreme fine-tuning, incredible precision and complex design.

To demonstrate just how exquisitely fine-tuned these parameters are, Hugh Ross provides the following explanation:

There simply is no dispute, even among secular scientists, that the universe appears to be exquisitely fine-tuned and designed to support life (more>>).

Accordingly, all creationists (YECs and OECs) can safely put to rest any concern that Big Bang cosmology eliminates the necessity of a Creator by proposing the universe came into existence by some kind of chaotic “bang” as it’s name implies.

Certain implications associated with Big Bang cosmology give rise to theological and philosophical implications which Christian apologists as well as many secular scientists recognize support a rational belief in a transcendent cause of the universe, such as the transcendent Creator described in the Bible. [See testimony of Hugh Ross here]

Both of these lines of inquiry imply the existence of a transcendent cause (like the transcendent God described in the Bible (more>>) that had the ability to put things in a state of order and the ability to set the universe in motion. As argued by Christian philosopher and apologist, R.C. Sproul, if it is postulated that there is some self-existent, eternal something from which everything else ultimately was generated  then that is the same as saying there is something that transcends everything else.  In that case, the argument simply comes down to the name of that something — X or YHWH (the Hebrew name for the transcendent God described in the Bible). [See, R.C. Sproul, “Defending Your Faith”, CD No. 3]

Because of the philosophical and theological implications associated with Big Bang cosmology, it is no surprise that when it was first proposed, the scientific community rejected it and opted to cling to the Steady State Theory (or Static Universe Theory) which postulated the universe never came into existence – it simply always existed. The Steady State Theory was more palatable to secular scientists because it did not require scientists to explain how the universe came into existence. [NOTE: For the same reason an eternally self-existing God like the God of the Bible does not rationally require an explanation for His coming into existence (more>>)]. However, as postulated in the Kalam Cosmological Argument for the existence of God, since everything that comes into existence requires a cause for doing so, the universe must also have a cause for its coming into existence (more>>)

As documented by Christian apologist and astrophysicist, Hugh Ross, it was because of the philosophical and theological implications of Big Bang cosmology that many in the scientific community initially rejected the idea of a beginning of the universe as maintained in Big Bang cosmology:

When Albert Einstein proposed his theory of general relativity, he immediately noted it predicted the universe was expanding from a beginning, from an infinitesimal volume. In order to save the static universe model, which proposed the universe never came into existence but had just always existed, Einstein added a cosmological constant into his general relativity equations to perfectly cancel off the effects of gravity in the universe. This allowed the steady state theory (in which the universe was not expanding from a beginning point) to remain viable. However, after astronomers were able to demonstrate through telescopic evidence that the universe was expanding, Einstein withdrew the cosmological constant from his equations calling it ‘the blunder of his scientific career.’” [Hugh Ross, Creator and the Cosmos, 3rd Ed., pgs. 32-67 (2001) citing to Douglas, “Forty Minutes with Einstein,” Journal of the Royal Astronomical Society of Canada, 50, pg., 100 (1956)]

Sir Arthur Eddington (a famous 20th century cosmologist) openly stated:  “philosophically, the notion of a beginning is repugnant to me.” In 1930, to counter the Big Bang theory Eddington proposed a model of the universe that eliminated a beginning and allowed “evolution an infinite time to get started.” That model was subsequently disproved. [Hugh Ross, A Matter of Days, pg. 141 (2004) citing to Eddington, “On the Instability of Einstein’s Spherical World,” Monthly Notices of the Royal Astronomical Society, 90, pg. 672 (1930) and “The End of the World from the Standpoint of Mathematical Physics,” Nature, 127, pg. 450 (1931)]

Geoffrey Burbidge (an atheist astronomer from the University of California at San Diego) was so philosophically opposed to a Big Bang model of the universe that when his fellow astronomers began adopting the model, he accused them of “rushing off join ‘the First Church of Christ of the Big Bang.’” [Hugh Ross, Creator and the Cosmos, 3rd Ed., pg. 32 (2001)] As noted by Christian astrophysicist and apologist, Hugh Ross, Burbidge’s response to the adoption of Big Bang cosmology demonstrates that even atheist scientists recognize that not only does Big Bang cosmology imply the existence of God, but it specifically implies the existence of a transcendent Creator like the Creator described in the Bible. It  also challenges the veracity of all pantheistic views as well as religions which describes God as being confined to the universe, creating from within the universe or creating within time.

“George Smoot (University of California at Berkeley astronomer and project leader for the COBE satellite) declared, ‘What we have found is evidence for the birth of the universe.’ He added, ‘It’s like looking at God.’” [Hugh Ross, Creator and the Cosmos, 3rd Ed., pg. 31 (2001) citing to The Associated Press, “U.S. Scientists Find a ‘Holy Grail’: Ripples at Edge of the Universe,” International Herald Tribune (London), 24 April 1992, pg. 1 and Thomas H. Maugh II, “Relics of ‘Big Bang’ Seen for First Time,” Los Angeles Times, 24 April 1992, pages A1, A30]

Specifically, because Big Bang cosmology logically implies the existence of a transcendent cause for the universe coming into existence, when scientists finally adopted the theory, Frederic B. Burnham (a science historian) reported that scientists were “‘prepared to consider the idea that God created the universe ‘a more respectable hypothesis today than at any time in the last hundred years.’”  [Hugh Ross, Creator and the Cosmos, 3rd Ed., pg. 31 (2001) citing to Briggs, “Science, Religion, Are Discovering Commonality in Big Bang Theory,” Los Angeles Times, 2 May 1992, pgs. B6-B7]

Regardless of a Christian’s particular view on the correct interpretation of Genesis creation account and the age of the Earth, it seems prudent for all Christians to be aware of the philosophical and theological implications of Big Bang cosmology which point to the existence of a transcendent cause of the universe, like the transcendent Creator described in the Bible.

Hugh Ross, Beyond the Cosmos: What Recent Discoveries in Astrophysics Reveal about the Glory and Love of God(Signalman Publishing, 3rd Ed., 2010)

Slideshow Photo: The illustration of the Big Bang was authored by NASA/WMAP Science Team and was downloaded from www.wikimedia.org which states the image is in the public domain because it was created by NASA and NASA copyright policy states “NASA material is not protected by copyright unless noted”. (See Template:PD-USGov, NASA copyright policy page or JPL Image Use Policy.)

Facts and Faith makes every effort to use media which is free for use or in the public domain. If you suspect a copyright violation on any factsandfaith.com publication, please notify us here ASAP.