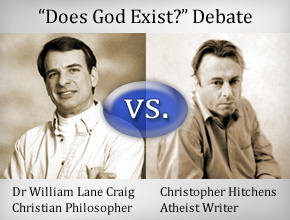 The average Christian does not realize that there is an intellectual war going on in the universities…Christianity is being attacked as irrational or obsolete, and millions of students, our future generation of leaders, have absorbed that viewpoint.  — William Lane Craig, Christian philosopher

The following is a sampling of some of the intellectual challenges many Christian young people face when they walk onto a secular college campus:

“Belief in God is nothing but a sedative for emotionally weak people who need to believe in something.”

“History demonstrates religion, and Christianity in particular, is responsible for terrorism and wars in the world.  We would all be better off without it.”

“Only people who believe in fairy tales, like Santa Claus, really believe Jesus was resurrected from the dead.”

“Scientists have demonstrated the universe could have popped into existence out of nothing just like Big-Bang theory says it did.”

“You might believe in Jesus and if that is your truth, that’s okay for you but it isn’t my truth. All religions are just different paths leading to the same thing.”

“Religion is a tool people in power use to control the masses.”

Richard Dawkins, an Oxford biology professor, is a very well-known, influential atheist who travels the world promoting atheism and arguing faith is a process of “non-thinking” and belief in God is nothing more than a mental delusion caused by a virus of the mind. One of Dawkins’ best-selling books is entitled The God Delusion. In Dawkins’ view, religion is responsible for all the evil in the world and he specifically ridicules the God of the Bible as “a petty unjust, unforgiving control-freak; a vindictive, bloodthirsty ethnic cleanser; a misogynistic, homophobic, racist, infanticidal; genocidal, filicidal, pestilential, megalomaniacal, sadomasochistic, capriciously malevolent bully.”

From the moment I entered my university campus, my faith was attacked from every direction.  My professors scoffed at the idea that I considered the Bible to be historically trustworthy. My classmates declared Christianity to be the cause of all the problems in the world….I still get knots in my stomach when I recall the probing questions that were thrown at me day after day.           —   Alison Thomas

The problem isn’t that well-reasoned responses to the objections of atheists and skeptics don’t exist; rather, the problem is many Christians aren’t aware that well-reasoned responses exist and/or they believe Christianity is a matter of faith and, therefore, it is unnecessary to intellectually defend Christianity.  However, as explained by Christian philosopher William Lane Craig, that kind of reasoning fails to recognize the distinction between ‘childlike’ faith and ‘childish’ faith:

Apologetics is an area of study concerned with establishing an intellectual basis for the truth claims of Christianity. Defensively, Christian apologists seek to respond to objections raised against the Christian faith by clarifying distortions and exposing false allegations made against the faith. Offensively, Christian apologists rely on philosophic, scientific and historic evidence and arguments to demonstrate a rational basis for believing the claims of Christianity to be true and no good reason to believe they are false. [See, William Lane Craig, Reasonable Faith, pg. xvi (1994); Kenneth Boa, The Apologetics Study Bible, “What is Apologetics?”, pg. xxv (2007)]

With the above thoughts in mind, there are at least seven (7) good reasons why every Christ-follower should make apologetics a priority in his/her life and engage in the intellectual war being waged against Christianity:

Given the statistical evidence that a great majority of Christian young people on college campuses are disengaging from their faith or, worse yet, recanting it, Christian adults can no longer afford to ignore the intellectual challenges made to the Christian faith by emotionally charged skeptics and atheists.  It is time for Christians to educate themselves on the issues and prepare themselves to respond to the intellectual objections made against Christianity in a passionate, yet gentle and respectful way (1 Peter 3:15-16).

When Christian young people walk onto a secular college campus, someone on that campus will try to convince them God doesn’t exist, religion is responsible for the evil in the world, scientists have proven the universe came into existence due to a quantum fluctuation, the theory of evolution has been scientifically proven and explains how life began and evolved to its present state, that Christianity is based on nothing more than myth and legend by people who can’t face the realities of living in a godless universe and Christians are a bunch of intolerant hypocrites who want to force their beliefs on everyone else.

In a national survey, churched teenagers were asked to identify the people who had the most influence on them in matters of life and faith. Mom was number 1 and dad was number 2. The next critical spheres of influence were other adults in that teenager’s life.  So, clearly, the problem isn’t that Christian adults don’t have influence with their young people, it’s that Christian adults aren’t using their influence in an effective way.  In the same study, only 12% of Christian teenagers reported having regular dialogue with their mother about faith or life issues.  When it came to fathers, the number dwindled to 5%.

Christian adults cannot continue to sit back as large numbers of Christian young people disengage from their faith and hope that someday they will find their way back to God. The price is too high, the scars are too deep and the effect on families and future generations is too severe.

… [w]e have the awesome opportunity of being agents of cultural change in Christ’s name.  For the church’s sake, for your own sakes, for your future children’s sake, do not squander this opportunity!  So, if, up until now, you’ve just been coasting, idling in intellectual neutral, now is the time to get it in gear!  — William Lane Craig

Kenneth Boa, The Apologetics Study Bible: Understand Why You Believe

Slideshow Photo:  Poster advertising the debate between William Lane Craig and Christopher Hitchens at Biola University (www.biola.edu).  A DVD of the debate entitled “Craig vs. Hitchens: Does God Exist?” can be purchased at www.http://apps.biola.edu/apologetics-store/collections/existence-of-god.