Hugh Ross is an astrophysicist with a B.S in physics as well as a M.Sc. and Ph.D. in astronomy.  Postdoctorally, Ross served as a research fellow at CalTech and later founded Reasons to Believe, an apologetics ministry “devoted to integrating science and faith and to demonstrating how the latest science affirms our faith in the God of the Bible.” (www.reasons.org).

In the YouTube videos below, Ross (who grew up in a non-religious environment) shares how his studies in science convinced him the universe was brought into existence by “something” that transcended the universe and he describes how he came to believe that “something” was a “Someone” — the transcendent God revealed in the Bible. Dr. Ross is a proponent of the Day-Age View of creation. 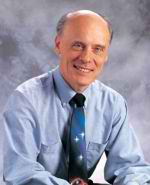 Ross became interested in science when he was 7 years old.  Ten years later, at age of 17, he became the youngest person to serve as the director of observations for Vancouver’s Royal Astronomical Society. In the YouTube videos below, Ross shares his testimony of becoming convinced, through science (and particularly Big Bang cosmology), that the universe had a beginning.  Since a beginning logically implies a “beginner” (because anything that comes into existence requires a sufficient cause for doing so (more>>) Ross began contemplating who “the beginner” might be.  He began searching through various “holy” books to determine if any of them offered reliable evidence of being communicated through a being that transcended the universe and, therefore could have been “the beginner.”  Ross says he originally assumed all the “holy” books were man-made concoctions but reasoned that if a “holy” book really had been communicated through a transcendent being, the book would be historically and scientifically accurate.

Ross discarded one holy book after another due to blatant historical and/or scientific errors (e.g., stating that stars were closer to Earth than the planets, that people lived on the sun, etc.) However, when Ross began reading the Bible, he noticed something very unique — the Bible not only contained a host of historical and scientific data but Ross also found the testable data was historically and scientifically accurate.  Ross found the Bible correctly described God (the cause of the universe) as a being who transcended the universe and Ross was particularly impressed with the fact that Genesis (written long before scientists had investigated the conditions of early Earth) not only correctly identified all 3 initial conditions of the earth but, from the stated viewpoint of an observer on the surface of the earth, recorded all 11 creation events in the correct order.  Applying probability theory, Ross calculated there was less than one chance in six billion that someone could place the 11 creation events and 3 initial conditions in the correct order by chance.  Over the next year and a half, Ross combed through the Bible looking for historical and/or scientific inaccuracies but he found the Bible to be “error free”.  Ross believed that such “perfect accuracy could only come from the Creator Himself.”

After becoming convinced of the truth of the Bible, Ross says he finally decided the most rational thing to do was to accept Jesus Christ as his Lord and Savior.

Ross now enjoys sharing the reasons he believes in the God of the Bible and the truth claims of Christianity on college campuses and other secular forums as well as in religious venues.  In Ross’s view, God has revealed truth in Scripture (special revelation) and the record of nature (general revelation). Ross believes that since all truth is God’s truth, if both revelations are accurately interpreted, they will (and do) reveal the same truth.

Ross is an Old Earth Creationist and proponent of the Day-Age View of the Genesis creation account (more>>).  He maintains that all 66 books of the Bible are “error free” and that Scripture is the final authority in all matters it addresses. For more on Ross’ theological belief’s go here>>.

Hugh Ross, A Matter of Days: Resolving a Creation Controversy

Hugh Ross, Beyond the Cosmos: What Recent Discoveries in Astrophysics Reveal about the Glory and Love of God

Hugh Ross, Creation and Time: A Biblical and Scientific Perspective on the Creation-Date Controversy

Hugh Ross, Hidden Treasures in the Book of Job: How the Oldest Book of the Bible Answers Today’s Scientific Questions

Hugh Ross, More Than a Theory: Revealing a Testable Model for Creation (Reasons to Believe)

Hugh Ross, The Creator and the Cosmos: How the Greatest Scientific Discoveries of the Century Reveal God

Hugh Ross, The Genesis Question: Scientific Advances and the Accuracy of Genesis

Hugh Ross, Why the Universe Is the Way It Is

Slideshow Photo: The Hubble telescope with the earth in the background.  Image Credit:  NASA (downloaded from www.nasa.gov)  License:  Public Domain. back>>