Illustration of the Solar System by NASA more>>

As discussed in An Introduction and Summary of the Evidence for the Existence of God from Design here >>, Christian apologists maintain that the hundreds of finely-tuned features scientists have discovered in the universe (all of which are necessary for life to exist) are most reasonably explained by the existence of an intelligent, transcendent Designer (like the God described in the Bible) rather than mere chance as proposed by Naturalists.

Without all of the just-right features, Earth would not be capable of supporting life.

Earth Has a Just-Right Parent Star (the Sun)

Example No. 1 — Earth’s Sun has a Just-Right Mass
A star more massive than the sun would burn too quickly and too erratically to support life on any planet in the solar system. If the sun were less massive, Earth would have to be closer to the sun in order to get enough heat to support life. But, if Earth was closer to the sun, the sun would exert so much gravitational force on the earth that it would cause Earth’s rotation period to slow down causing one side of the planet to get too cold and the other side to get too hot to support life.

In comparison to Earth, the sun is very massive.  Indeed, if the sun were the size of a basketball, then, comparatively, the earth would be less than the size of a ball bearing used in a BB gun.  The sun has the just-right mass to allow it to provide Earth with a stable environment with sufficient amounts of light and heat that can support life. 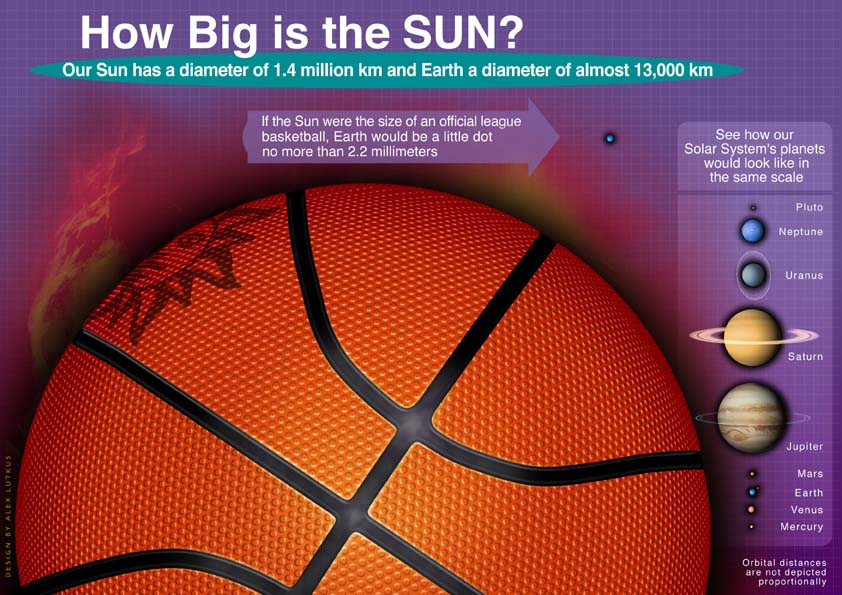 The Size of the Sun Relative to Earth more>>
Image Credit: NASA/JPL

Example No. 2 — Earth’s Sun is a Single Star
To support life, a planet must be able to provide sufficient heat and light.  Consequently, life is not possible on a planet that does not orbit any star because the planet would be too cold and too dark to support life.

Life is also not possible on a planet that orbits a binary star system or a multi-star system because the gravitational forces exerted on the planet by the additional stars would frequently pull the planet out of a temperature zone where life could exist. Notably, excluding white dwarfs, stars are in a binary and multi-star system. Earth orbits a single star system which is the only kind of star system that can support life. [See, Hugh Ross, “Search for Planets Draws a Blank” (reasons.org)]

Jupiter is 40 light minutes away from Earth (i.e., it takes 40 minutes for light, which travels at the speed of 186,000 miles per second, to travel from Jupiter to Earth.  Jupiter is also very massive in comparison to Earth — Jupiter could hold 100 planets the size of Earth.   Jupiter also outweighs the combined total all of the other planets in the entire solar system by 2 ½ times. 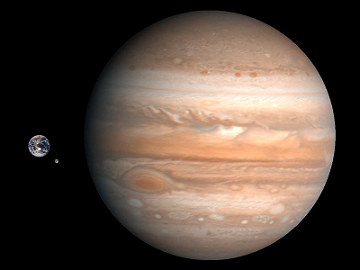 Scientists estimate that without Jupiter being the size it is and positioned where it is in relation to the earth, comets and asteroids would strike Earth a thousand times more often than they do. One large impact (or several smaller impacts) would kill off all advanced life on Earth either from the initial blast or from the amount of debris ejected into the atmosphere which would subsequently prevent sufficient amounts of light and heat from reaching the surface of the earth. Without sufficient light and heat, Earth would quickly become too cold to support life.

[NOTE: Scientists believe a large asteroid or comet (about 6 miles across) impacted the Gulf of Mexico leaving an impact crater about 110 mile across and 12 miles deep.  The tremendous devastation caused by the impact is believed to have resulted in the extinction of about 3/4 of all species living on Earth, including the dinosaurs.]

Although Jupiter’s size does a good job of shielding Earth from being impacted by asteroids and comet impacts, if Jupiter was any more massive that it is or any closer to Earth than it is, Jupiter’s gravitational force would pull Earth out of its stable orbit around the sun.  If that were to happen, Earth would be subjected to dramatic temperature variations, unstable atmospheres, high velocity winds and a host of other problems associated with unstable orbits, all of which are deadly to life on Earth.

Earth Has a Just-Right Moon

The moon plays many important roles with respect to Earth’s ability to support life. For example, whereas the axial tilts of other planets in the solar system have greatly varied throughout their histories, the gravitational force exerted on Earth by the moon has kept Earth’s axial tilt at approximately 23.5° which is optimal for life on the planet because that degree of tilt provides Earth with moderate seasons and prevents extreme temperatures anywhere on the planet.

The gravitational force exerted by the moon also keeps Earth from rotating too quickly which is important to support life on the planet.  If the earth rotated too quickly, its inhabitants would be subjected to high velocity winds deadly to life.

Because Earth’s axial tilt and Earth’s rotation period are just-right, Earth has a stable environment, with a steady climate and regularly occurring seasons. The gravitational force exerted by the moon on Earth’s oceans also causes the oceans to ebb and flow which not only keeps Earth’s shorelines rich in nutrients, but prevents the oceans from becoming stagnant and polluted.

Without the moon, or if the moon was not the just-right mass or was not the just-right distance from Earth, Earth would not have stable seasons, it would be subjected to unrelenting hurricane-like weather as well as deadly temperature fluctuations. Additionally, Earth’s shorelines would be extremely polluted and life-essential nutrients formed in the oceans would not regularly migrate to the shorelines of Earth’s continents for consumption by people, animals and plant life which are dependent on those nutrients for their survival.

Earth has a just-right moon to support life on the planet.

The incomprehensibility of this kind of fine-tuning is more fully appreciated when one considers that there are only about 1025 grains of sand on all the beaches on Planet Earth.  This means that fine-tuning in the order of 1060 is like saying not a single grain of sand could be added to or removed from one beach on Planet Earth without causing the entire planet to be incapable of supporting life. Indeed, this illustration is tremendously understated because it assumes a change in one part in about 1025 (the estimated number of grains of sand on Earth) whereas the total mass density of the universe must be fined-tuned to within one part in 1060 and dark energy must be fined tuned to 10120, which are substantially greater numbers than 1025.When one looks at the probability calculations for life to have developed by chance, the numbers are even more incomprehensible.  For example, just the chance of amino acids randomly coming together to form the 2,000 enzymes which are essential for life to exist has been calculated as only one chance in 1040,000 here >>. Taking all of the fine-tuned features that must exist in a life-permitting universe into consideration, Donald Page of Princeton’s Institute for Advanced Science has calculated that the odds of the universe developing by blind, random chance into a form suitable for life as one chance in 10,000,000,000124here >>,  which is a number so large that it exceeds all imagination. [Ravi Zacharias, The End of Reason, pg. 35 (2008)]

Relative Sizes of Jupiter, Earth and the Moon:  This image shows a size comparison between Earth and Jupiter.  The image was downloaded from www.wikimedia.org which states the image is in the public domain because it was solely created by NASA. (Back to article >>)
Picture of a Full Moon:  This photo was taken by NASA/Sean Smith and downloaded from the www.nasa.org website. (Back to article >>)