A Planet Must Reside in a Just-Right Galaxy

In order for a planet to be capable of supporting life, the planet must reside in a galaxy capable of supplying the planet with all the elements needed to support life (e.g., carbon, iron, oxygen, potassium, nitrogen, etc.)

Life cannot exist in an elliptical galaxy because stars stop forming in these kinds of galaxies before the galaxy is enriched with essential life-supporting heavy element materials (e.g., iron, nickel, copper, aluminum, etc.) Life cannot exist on planets in large irregular galaxies because large irregular galaxies have active nuclei which spew out toxic materials and radiation which are deadly to life. Planets located in small irregular galaxies cannot support life because the stars in those galaxies do not produce sufficient amounts of the heavy element material needed to support life.

Scientists now know only a spiral galaxy (like our Milky Way Galaxy) is capable of providing a planet with sufficient amounts of all of the essential elements needed to support life on a planet in the galaxy. Only 6% of all the billions and billions of galaxies in the universe are spiral galaxies and only some of those spiral galaxies can house a life-supporting planet. If the central bulge of a spiral galaxy is too big, the planets in the galaxy will be bombarded with intense deadly radiation but if the bulge is too small, not enough gas and dust will be funneled to the zone of the galaxy where a life-supporting planet can reside. [See, Hugh Ross, The Creator and the Cosmos, pgs. 176-178 (2001)] 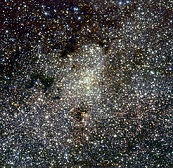 Center of the Milky Way more>>

A life-supporting planet must not only reside in a just-right spiral galaxy but the planet must reside in a just-right location within the galaxy. No planet residing in either the central bulge of a spiral galaxy or in any of the spiral arms of a spiral galaxy is capable of supporting life because there are too many stars located in those areas. Star congestion is a problem for a life-supporting planet for at least two reasons: 1) stars produce radiation and too much radiation is deadly to life and 2) stars exert gravitational force and too many nearby stars would destabilize the planet resulting in deadly temperature variations, unstable atmospheres, high velocity winds, etc. However, if the planet were to be located on the outer edge of a spiral galaxy, where there is no star congestion, there wouldn’t be a sufficient number of stars to provide the planet with necessary amounts of life essential elements produced by stars (e.g., carbon, iron, oxygen, potassium, nitrogen, etc.)

Indeed, in order for life to exist on a planet in a spiral galaxy, the parent star must be located between two spiral arms and the parent star must stay between the spiral arms without getting swept up into one of the adjacent spiral arms where there is too much star congestion. As it turns out, there is only a few such locations in a spiral galaxy which scientists refer to as co-rotation radii.  Only .0001% (much less than 1%) of all stars in a spiral galaxy are located at co-rotation radii. As depicted in the illustration below, our star (the Sun) is located in this rare position. 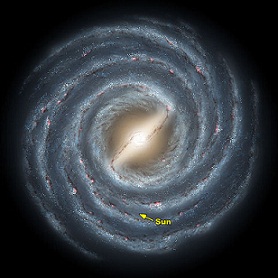 Location of the Sun in the Milky Way >>

Because our sun is one of the rare stars located at a co-rotation radius, Earth is supplied with necessary life-essential elements and Earth’s orbit has remained stable such that Earth has not been subjected to deadly temperature variations, unstable atmospheres, high velocity winds or a variety of other problems associated with unstable orbits that would make life on Earth impossible for advanced life. 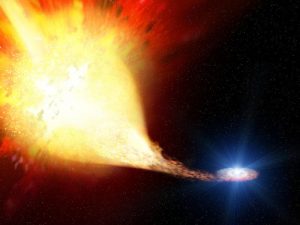 Scientists have determined Earth has been provided with just the right quantities of the heavy elements needed to support life because a Type I supernova and a Type II supernova occurred at the just right time (i.e., when the Sun’s solar nebula was formed). However, once life began existing on Planet Earth, it was necessary for the number of supernovae occurring close enough to affect life on Earth to dramatically decrease; otherwise, life on the planet would be exterminated by the deadly radiation expelled from supernovae explosions.

Even if a star (like the Sun) resides at a just-right location at a just-right time for planets orbiting the star to get the just-right amounts of life essential elements from a Type I supernova and a Type II supernova, there is still one necessary heavy element a life-supporting planet must have that it cannot get from supernovae, namely, fluorine. Without fluorine, certain proteins necessary for life could not form. 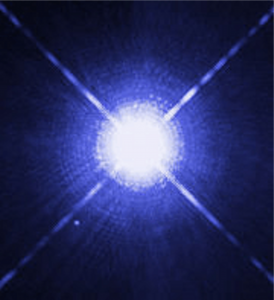 Finally, after fluorine is manufactured on the surface of the white dwarf, the fluorine must then be expelled from the white dwarf into interstellar space so it may be collected and retained by the life-supporting planet.

Because our star (the sun) resides in a just-right spiral galaxy and is located in a just-right position between the spiral arms of the galaxy as well as being located near Type 1 and Type II supernovae in addition to a white dwarf star in a binary star system with a large star in the galaxy, Planet Earth has been provided with all of the elements necessary to support life (e.g., carbon, iron, oxygen, potassium, nitrogen, fluorine, etc.). [See, Hugh Ross, The Creator and the Cosmos, pgs. 179-180, 188-189 (2001)]

Taking all of the fine-tuned features that must exist in a life-permitting universe into consideration, Donald Page of Princeton’s Institute for Advanced Science has calculated that the odds of the universe developing by blind, random chance into a form suitable for life as one chance in 10,000,000,000124 here >>,  which is a number so large that it exceeds all imagination. [Ravi Zacharias, The End of Reason, pg. 35 (2008)]

Types of Galaxies:  A comparison of three different types of galaxies downloaded from www.nasa.gov. (Back to article >>)

Center of the Milky Way Galaxy:  This image of the center of the Milky Way was taken with a European Southern Observatory telescope with a near- and mid-infrared spectrometer and camera.  The image was downloaded from www.wikimedia.org which states the image was produced by the ESO and is licensed under the Creative Commons Attribution 3.0 Unported license. (Back to article >>)

Milky Way Galaxy with Sun:  This artistic rendering of the Milky Way galaxy which depicts the location of the Sun was downloaded from www.wikimedia.org which states the image is in the public domain because it was solely created by NASA. (Back to article >>)

Exploding Supernova: This NASA illustration by Justyn R. Maund (University of Cambridge), was downloaded from www.wikimedia.org which states the image is in the public domain because it was solely created by NASA.  (Back to the article >>)

Sirius A and B:  This 2003 Hubble Space Telescope image shows Sirius A (the brightest star in the nighttime sky) and it’s companion star, Sirius B (the faint dot located in the lower left) of the photograph.  Downloaded from www.wikimedia.org which states the image is the public domain because it was created by NASA and the ESA. Credit: H. Bond (STScI) and M. Barstow (University of Leicester). (Back to the article >>)