Was Jesus’ Tomb Found Empty Because Someone Other than Jesus’ Disciples Stole His Body?

Christian apologists confidently maintain there are good reasons to believe God exists (more>>) and, further, if God exists then it is rational to believe God could have supernaturally raised Jesus from the dead (more>>).

In support of the proposition that God did, in fact, supernaturally raise Jesus from the dead, one of the lines of evidence Christian apologists point to is the historically documented evidence that within days of Jesus’ crucifixion and burial, the tomb Jesus was buried in was found empty.

Because of the difficulties faced in claiming the reason Jesus’ tomb was found empty was because Jesus’ disciples stole the body, some skeptics propose someone other than Jesus’ disciples could have stolen His body out of the tomb. As set forth in this article, Christian apologists maintain such a proposal is factually inadequate and far from rationally compelling.

Summary of the Historical Evidence of Jesus’ Grave Being Found Empty

The historical record establishes Jesus’ tomb was found empty just days after his crucifixion and burial. The empty tomb was attested to by several witnesses, was publicly addressed in speeches given in Jerusalem where the events took place, was inferentially admitted by both Roman and Jewish leaders and was believed by at least two skeptics (James the Just and Paul fka Saul).

For a complete discussion of the historical evidence that Jesus’ tomb was found empty, go here.

Was Jesus’ Tomb Found Empty Because Someone Other than Jesus Disciples Stole His Body?

Rebuttal Point No. 1: There is No Indication in the Historical Record that Anyone Had a Motive for Stealing Jesus’ Body

What motive did any supposed unknown third part(ies) have for stealing Jesus’ body? Although it is possible some unknown person living in Jerusalem could have had a motive for stealing Jesus’ body, there is no historical data of any such motive. Those who followed Jesus were probably just as afraid of the Roman and Jewish leaders as Jesus’ core disciples were who fled as soon as Jesus was arrested (Matt. 26:56) Although Peter followed Jesus at a distance (Mark 14:54, Luke 22:54), while Jesus was on trial, Peter denied even knowing Jesus on three separate occasions (Matt. 26:69-75; Mark 14:66-72; Luke 22:54-62). John 20:19 reports even after Peter and John found the tomb empty and Mary Magdalene reported she had seen the resurrected Jesus, the disciples met behind closed doors “for fear of the Jews.” [See, Norman Geisler, Baker Encyclopedia of Christian Apologetics, pgs. 645, 655 (1999)] (more>>).

Those who followed traditional Judaism also had no motive for stealing Jesus’ body because the Jewish leaders despised Jesus and, after the crucifixion, they voiced concern the disciples might try to steal the body (Matthew 27:62-65).

Everyone in Jerusalem were certainly aware Jesus had been crucified by the Romans at the urging of the Jewish leaders. Consequently, everyone in Jerusalem had reason to fear the Romans and/or Jewish leaders would do the same to them as they had done to Jesus if they attempted to steal Jesus’ body. Accordingly, without historical evidence of a particular motive for stealing Jesus’ body, the explanation that someone other than Jesus’ disciples stole his body is mere speculation without any evidential historical support. [See, Gary Habermas, The Apologetics Study Bible, “Can Naturalistic Theories Account for the Resurrection?”, pg. 1622 (2007)]

Rebuttal Point No. 2:  The Guards Would Have Prevented Anyone from Stealing Jesus’ Body Out of the Tomb

As stated in Matthew 27:62-65, after Jesus’ body was placed in the tomb, the chief priests and Pharisees met with Pilate and reminded him that Jesus (who they referred to as the “deceiver”) had said, “After three days I am to rise again.” (See, Matt 12:39-49; John 2:19). The Jewish leaders then asked Pilate to “give orders for the grave to be made secure until the third day, lest the disciples come and steal him away and say to the people, ‘He has risen from the dead.’” Pilateresponded, “You have a guard, make it as secure as you know how.” As noted below, some scholars contend Pilate’s statement, “You have a guard” was an order dispatching a Roman guard to secure the tomb; other scholars maintain Pilate was telling the Jewish leaders to use their own guard (the temple guard) to secure the tomb:

Roman Guard Theory: Josh McDowell points to the following facts in support of the theory the term “guard” (koustodia in Greek) was used by Matthew to refer to a Roman guard: 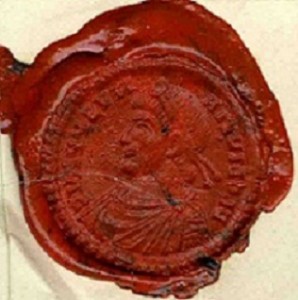 EXAMPLE OF A ROMAN SEAL (MORE)

Whether a Roman Guard or Temple Guard was sent to secure Jesus’ tomb, any theory which asserts anyone stole Jesus’ body must provide a reasonable historical explanation of how anyone could have broken the seal placed on the tomb, moved the 1 to 2 ton stone that blocked the opening to the tomb, and removed Jesus’ body from the tomb without alerting the guards. 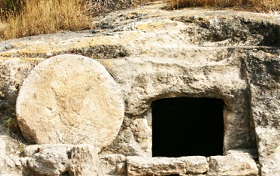 Rebuttal Point No. 3:  Nobody Stealing Jesus’ Body Had a Reason to Leave the Grave Clothes Behind

Rebuttal Point No. 4: If there was Evidence Anyone Had Stolen Jesus’ Body, James and Paul Would Have Suspected it and Wouldn’t Have Converted to Christianity

James (later known as James the Just) was Jesus’ half brother and a skeptic during the time of Jesus’ ministry (Mark 3:21:31-35; John 7:1-10). Paul fka Saul was a Pharisee who hunted Christians down to arrest and persecute. Both of these skeptics certainly heard the explanation for the empty tomb the Jewish religious leaders had spread around, namely, that Jesus’ body had benn stolen (Matt. 28:11-15). Justin Martyr reported Jerusalem authorities sent representatives throughout the Mediterranean to explain Jesus’ followers had stolen Jesus’ body. [See Josh McDowell & Bill Wilson, A Ready Defense, pg. 232 (1993)] If there was any persuasive evidence that Jesus’ body had been stolen by anyone, James and Paul would have believed that explanation rather than believing in Jesus’ resurrection. Further, if at some later time, James and Paul became aware of evidence that someone had stolen Jesus’ body, they would have abandoned Christianity. However, not only did James and Paul never recant their belief in the resurrection, they died as martyrs for that belief. [See, Gary Habermas, The Apologetics Study Bible, “Can Naturalistic Theories Account for the Resurrection?”, pg. 1621 (2007); Norman Geisler, Baker Encyclopedia of Christian Apologetics, pg. 645 (1999)]

Rebuttal Point No. 5: The Explanation that Someone Other than the Disciples Stole Jesus’ Body Doesn’t Explain Jesus’ Post-Crucifixion Appearances

As set forth in the article entitled “The Resurrection Best Explains Jesus’ After-Death Appearances to Multiple Eye Witnesses – Introductory Summary (here), Jesus appeared to over 500 people, on twelve separate occasions, over a forty day period (except for his appearance to Paul) and to at least two skeptics, James the Justand Paul fka Saul. [For a complete index of the witnesses with referenced notations of when each witness saw Jesus and what they observed, go here.]

The explanation that Jesus’ body was stolen doesn’t explain why so many people saw Jesus alive after he died on the cross and was buried in the tomb. Even James the Just and Paul fka Saul (both of whom were skeptics at the time) claimed to have seen Jesus in a resurrected body. [See, Gary Habermas, The ApologeticsStudy Bible, “Can Naturalistic Theories Account for the Resurrection?”, pgs. 1621-1622 (2007)] If someone stole Jesus’ body, Jesus was still dead and his body was somewhere. Accordingly, those who attempt to explain away the empty tomb by proposing Jesus’ body was stolen must also explain the post-crucifixion appearances of Jesus. [See, Norman Geisler, Baker Encyclopedia of Christian Apologetics, pg. 645 (1999)]. Although skeptics have attempted to provide a reasonable alternative explanation for the eyewitness accounts of Jesus being seen alive, Christian apologists steadfastly maintain none of the alternative explanations are adequate much less rationally compelling (more>>)

Following a two day debate over the evidence of the resurrection between Dr. Gary Habermas and well-known skeptic, Dr. Anthony Flew, a panel of five philosophers from American universities (including the University of Virginia, James Madison University and the University of Pittsburgh) voted 4 to 1 in favor of the case for the resurrection, with 1 judge voting the debate was a draw. After listening to both sides of the debate, one of the judges concluded the historical evidence of Jesus’ resurrection was “strong enough to lead reasonable minds to conclude that Christ did indeed rise from the dead.” [Ankerberg & Weldon, Ready With an Answer, pgs. 132-133 (1997) citing to Terry L. Miethe (ed.), Did Jesus Rise from the Dead? The Resurrection Debate, pg. xiv (New York Harper & Row, 1987)]. Another of the judges stated:

[Ankerberg & Weldon, Ready With an Answer, pgs. 132-133 (1997) citing to Terry L. Miethe (ed.), Did Jesus Rise from the Dead? The Resurrection Debate, pg. xiv (New York Harper & Row, 1987)] Because there are good reasons to believe God exists and that he supernaturally raised Jesus from the dead, Christian apologists insist it is not only unfair for skeptics to claim Christians are intellectual simpletons for believing in Jesus’ resurrection but it is intellectually dishonest to write off the resurrection as mere foolishness.

For information on how to know God personally, go here.

John F. Ankerberg and John Weldon, Ready With an Answer

Norman L. Geisler, The Battle for the Resurrection: Updated Edition

Gary Habermas, The Apologetics Study Bible: Understand Why You Believe

Frank Morison, Who Moved the Stone?

Lee Strobel, The Case for Easter: Journalist Investigates the Evidence for the Resurrection

Slideshow Photo:  This photograph of the Garden Tomb (where some people believe Jesus was buried) was taken by Berthold Werner.  Downloaded from www.wikimedia.org which states the image is licensed under the Creative Commons Attribution-Share Alike 3.0 Unported license (CC-BY-SA-3.0).

Roman Seal:  This photograph is an example of a Roman seal.  The image was provided to www.wikimedia.org  by “portableantiquities”.  Wikimedia states the image is licensed under the Creative Commons Attribution 2.0 Generic license.

Photograph of a Tomb:  Photographer unknown.