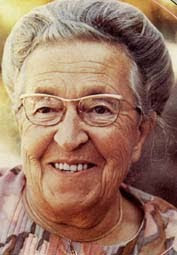 Corrie as well as her father, brother and sister were imprisoned in various German camps and jails for helping Jews escape Hitler’s genocide of an estimated six million Jews in WWII. Corrie’s father and sister died while imprisoned and her brother died from tuberculosis, which he contracted after being released from a concentration camp.  Out of 130,000 prisoners that passed through Ravensbrück, Corrie was one of 40,000 prisoners who survived the camp and was released.  She described Ravensbrück as a “concentrated mass of problems and misery.”  Even though Corrie suffered indescribable injustices as well as severe physical and emotional pain and suffering, she spent her post-prison life preaching about God’s love and repeatedly proclaiming that she learned one very important thing during her imprisonment at Ravensbrück:

“There is no pit so deep that the love of God is not deeper still.”

Besides talking about God’s love, Corrie’s other favorite topic was forgiveness.  Forgiveness wasn’t something Corrie just talked about, it was something she implemented in her life.  In 1947 when she was speaking in Berlin, a man approached Corrie and asked, “Do you know who I am?”  It was then that Corrie recognized the man as one of her guards at Ravensbrück.  In fact, the man was one of the more cruel guards who had committed horrible acts of cruelty against Corrie and her sister.

When the man asked Corrie to forgive him, her immediate emotional reaction was a sense of hatred and bitterness.  But then, the following words from Romans 5:5 resonated within her heart:  “God has poured out his love into our hearts by the Holy Spirit, whom he has given us.”  At that moment Corrie says she knew God’s love for the man was greater than her hatred for him.  So, she looked at the man and said, “Brother, give me your hand.” As the man put his hand in Corrie’s, she told him, ” I forgive you everything.”  In her book, The Hiding Place, she described what happened next:

“For a long moment we grasped each other’s hands, the former guard and the former prisoner. I had never known God’s love so intensely as I did then.“

In the YouTube video below,  Corrie talks about her experience of helping thousands of Jews escape the horrors of the holocaust until she was betrayed by a man she had given her last “dime” to help.  Corrie also describes how God was with her during her imprisonment and how God gave her the courage and grace to forgive those who had betrayed and brutalized her.

Slideshow Photo: A photograph of Ravensbruck Concentration Camp by Norbert Radtke.  Downloaded from www.commons.wikimedia,org which states the image is licensed under the Creative Commons Attribution-Share Alike 3.0 Unportedlicense (CC-BY-SA-3.0)